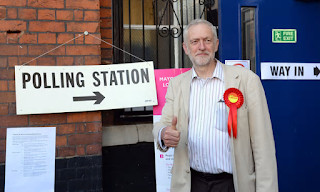 A few months ago, when political commentators looked ahead to 2016, there was a widespread prediction that Labour would suffer substantial losses in the council elections. Would it be 200 seats lost? Perhaps a little less, perhaps even more?
After all, these elections would be for seats previously contested in 2012, a mid-term peak for Ed Miliband, and it was assumed that Corbyn must be electorally unpopular. Yet Corbyn and Labour have defied the critics. The journalists and pundits have been left floundering, desperately trying to make the facts fit their narrative.
Local elections
There have been no significant losses for Labour in the council elections. This is all the more remarkable when you consider the manufactured media storm about allegations of antisemitism.

It is now clear that the media circus made no difference to Labour's vote. This must be exasperating for the small minority of hardline right-wing 'Bitterite' Labour MPs who hoped that poor results would trigger a challenge for the leadership, or at least gravely destabilise Corbyn's leadership.

Labour's vote has been sustained despite the widespread perception of the party as deeply divided, which is normally an electoral liability. It helps that the Tories are also divided, especially over the EU referendum. A section of the Parliamentary Labour Party has been determined to undermine - and in the longer term oust - Jeremy Corbyn as leader. But having made electability the central issue of contention, they have an unenviable task now it's become clear that a Corbyn-led Labour can do well at the ballot box.

Zak Goldsmith's campaign for London mayor was perhaps the most racist election campaign by a mainstream political party in the UK for decades. It failed. Sadiq Khan was elected, returning the mayoralty to Labour after eight years with Tory Boris Johnson in the role.
Khan is reportedly the first Muslim mayor of a major city in western Europe. London is a multicultural city and a mainly working class city (though one with extraordinary inequality). Whatever the weaknesses of Khan himself, his victory is a welcome riposte to racists and an important breakthrough for Labour.
It marks the rejection of a grubby campaign, orchestrated from the top with the involvement of Tory central office and David Cameron's approval. It attempted to link Labour's candidate, by virtue of being a Muslim, to terrorism, painting him (and Corbyn) as a threat to security, even exploiting the memory of the London bombings in July 2005 for political advantage.
The Tories, in the final couple of weeks of the campaign, attempted to turn the London elections into a referendum on Jeremy Corbyn. The fact that Labour made a couple of gains on the London Assembly as well as winning the biggest prize suggests that's not the winning tactic that many inside the Westminster bubble assume it will be.
Scotland

Labour's bad news came in Scotland. Corbyn's leadership has made no impact there. The decline of Scottish Labour has deep roots and appears to be irreversible.

Every election in Scotland - whether for Westminster, Holyrood or local government - now takes place through the prism of the independence debate. The campaign for independence, the referendum itself and its aftermath have transformed Scottish politics. For many voters, Labour is defined first and foremost as a pro-Union party.

Labour is now being squeezed by both the SNP (pro-independence and broadly social democratic) and the Tories (anti-independence and right-wing). There is a diminishing social base underpinning Labour in Scotland. Note, for example, how the SNP now commands much higher levels of support than Labour across much of Glasgow, historically a Labour heartland.

Scottish Labour's disastrous fate is a legacy of the New Labour years - during which support for the SNP grew - accentuated by the impact of campaigning with the Tories to preserve the Union. Scottish politics has for some years established its own distinct trajectory; it would be naive for anyone to think that a leftwards shift in the UK-wide Labour Party will make much difference (especially when Scottish Labour has failed to shift with it).

The SNP's (very narrow) failure to secure a majority in the Scottish Parliament was a surprise, though it remains the dominant party of Scottish politics, just as it was last May when 56 out of Scotland's 59 Westminster seats were won by the SNP. In a number of constituencies where the party was in second place, it looks like many pro-Union voters have voted tactically for whichever party was likely to block the SNP from winning the seat.
It was also held back somewhat by political timidity, failing to generate the kind of enthusiasm witnessed last spring when - for the general election - the party focused heavily on being an anti-austerity, anti-Trident antidote to a moribund Westminster mainstream. Having failed to win an outright majority, the SNP will now rely on support from the pro-independence Scottish Greens, who had a good election night (winning 6 regional list seats).

There has been some media hype about the Tories overtaking Labour in Scotland. This is indeed a historic shift, but it is largely due to Labour's collapse and not an endorsement of the Tories. The Tory vote share is only a source of excitement for the Tories because it has, for some time, done so catastrophically badly in Scotland. There seems to be a hardening polarisation linked to the question of independence, with many pro-Union voters rallying to the Tories.
What next?
Jeremy Corbyn and the left are undoubtedly strengthened by the results. This is particularly reassuring after a difficult couple of weeks due to the media hysteria about antisemitism allegations, which have been handled by the Labour Party in a manner that has emboldened both Labour's right wing and the Tories.
The 'electability' question has not been entirely settled and there is a long way to go to forming a government in 2020. But the omens are reasonably good and the results are widely acknowledged to be a move in the right direction, even if much of the media (and the Bitterite MPs) are reluctant to accept this. Speculation about a 'coup' against Corbyn has quickly receded. His position is, probably for some time, fairly secure.
Nonetheless, the left-wing leadership of the Labour Party is fragile in many ways. There will still be great pressure to compromise from the right, with some associated with the left joining in the calls for compromise too. Such compromise would generate disillusionment among those enthused by Corbyn's rise and the alternative he espouses. It would increasingly demobilise Corbyn's own supporters.
The recent, highly successful, Jeremy Corbyn 4 Prime Minister events gave a sense of the continuing appetite for what Corbyn represents. There is a wide layer of people who will campaign around left-wing demands and policies, not just electorally but through campaigns and movements, if Corbyn, McDonnell and the left provide a lead.
This year has already seen big demonstrations against austerity, Trident and racism, and nationwide protests and rallies in solidarity with the striking junior doctors. Those movements need to be sustained and strengthened. Their impact is magnified when leading Labour figures participate in them. At the same time, the efforts of Corbyn and his allies to permanently shift Labour to the left are emboldened when large numbers of people take to the streets and demonstrate.
This week has also seen Tory U-turns or partial U-turns on accepting child refugees, negotiating with junior doctors and forced academies. They are weak - and cracking under pressure from both a left-led Labour Party and the wider protest movements and trade union movement. The EU referendum and the emerging scandal over spending on their general election campaigns in some seats threaten to deepen their crisis.
The Tories' greatest asset is the 'Bitterites', who repeatedly take the focus away from what the Tories are doing and undermine Corbyn's opposition to Tory attacks. Corbyn and allies need to get tougher with them and effectively marginalise them. The Tories' greatest threat comes from an alliance of Labour's left leadership and the movements on the streets. This alliance needs to become more powerful than ever.