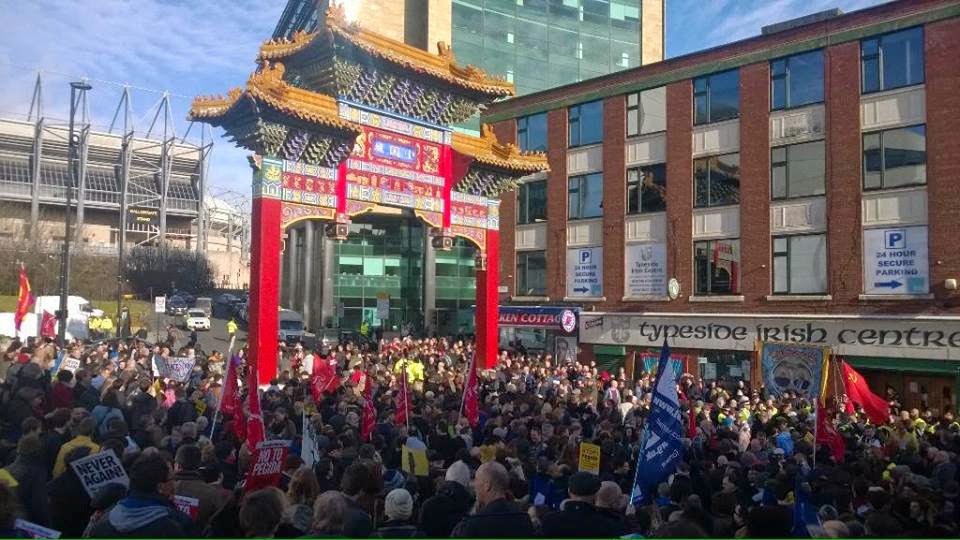 Yesterday's anti-racist demonstration in Newcastle was successful beyond the hopes of all of us involved in organising and promoting it. Now for some reflection.

1) It was a huge local demo. Vera Baird, police and crime commissioner, tweeted that we had 3000 while the Pegida rally was only 200. Even if some media reports (putting the racists at 400) are correct, the ratio in favour of anti-racists is massive. This is especially significant for Newcastle because just two years ago 2000 EDL supporters marched through our streets (greatly outnumbering us) a few days after the killing of Lee Rigby.
With the exception of 30 November 2011 - when we had a demo of nearly 10,000 by striking public sector workers - that makes it Tyneside's biggest local demonstration (on any issue) for decades. I am informed by Nigel Todd - a historian of Tyneside anti-fascism in the 1930s as well as a local councillor - that it was the biggest anti-racist or anti-fascist protest in Tyneside since 1934, possibly ever. It also received vastly more media coverage than any Newcastle protest I recall.

2) The turnout was also magnificently diverse. Hundreds of Geordie Muslims turned out, but the great majority on the demo were non-Muslims. It became a spectacular gesture of solidarity with Muslims facing racist hatred and Islamophobia, while also asserting our collective pride in being a multi-cultural city and a multi-cultural society.
The symbolism of starting the march outside the Tyneside Irish Centre end of Chinatown - nodding towards two historically immigrant communities in Newcastle simultaneously - was beautiful. The fact that St James' Park, home of the club that wears black and white and currently fields a number of Muslim players, was in the background made it perfect. And Muslim player Papiss Cisse scoring the winner for NUFC in the home game which took place later the same day was a fitting bonus. 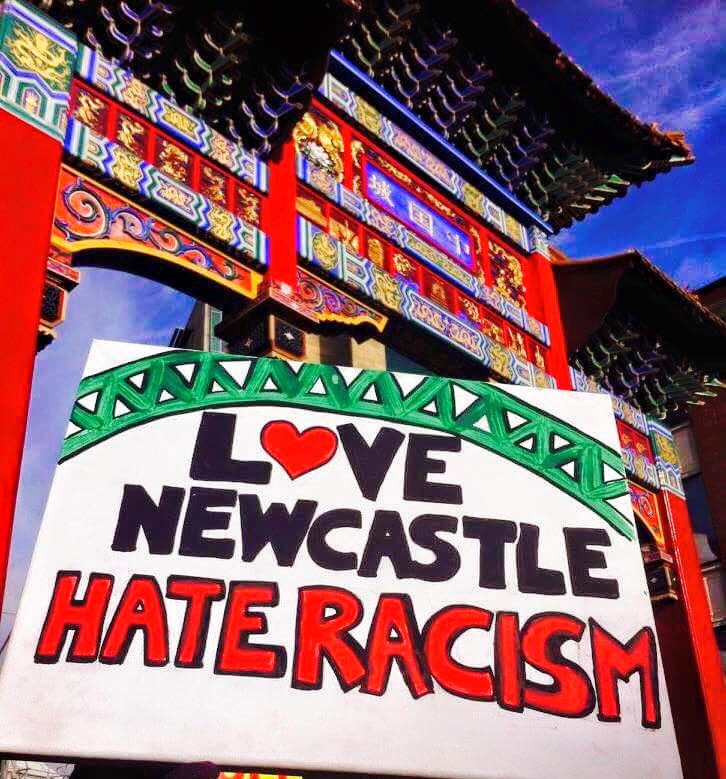 3) The fact that it was Pegida's first attempt at demonstrating anywhere in the UK gave yesterday considerable significance. I was co-chairing the rally and I announced at the start that our primary aim for the day was to make sure this would be Pegida's last demonstration anywhere in the UK. It was Newcastle's responsibility to show that Pegida was isolated and stop it before it got started.
Pegida had deliberately chosen Newcastle because the group viewed it - from afar - as a soft target where they would meet little opposition. That was an insult and regarded as such by people in Newcastle. Pegida thought that the city having a small Muslim population compared to some British cities would give it a free pass, then the group - emboldened - would move on to Birmingham and London.
Our counter-demonstration was important because Pegida has (or had, prior to yesterday) the potential to become a 'respectable' vehicle for anti-Muslim street protest. To a certain extent the EDL succeeded with that project in its early days - when it could mobilise on a much greater scale than today - but it didn't achieve what Pegida managed with its huge Dresden rally. In the north east, the EDL and similar groups can mobilise their own hooligans but have been reduced to a very small and narrow base incapable of appealing to a wider constituency. So the stakes were high yesterday.

4) It is crucial that the demonstration was built on a much broader basis, however, than simply opposing the far right. The issue is racism. The issue is Islamophobia.
The demonstration was promoted with that in mind. The likes of Pegida and the EDL feed off mainstream Islamophobia in politics, media and the British state. The demonization of Muslims, with a whole set of apparently 'respectable' prejudices and stereotypes, has flourished since 2001, when the 'war on terror' (and British participation in it) began.
At the same time, anti-immigrant rhetoric poisons establishment politics, often diverting popular anger away from the real enemies: the bankers, their politicians, and the savage cuts those politicians continue to impose on millions of working class people. The Newcastle Unites demonstration was an expression of opposition to all of that, and reflected the widespread yearning for a principled anti-racist political culture.
5) Unity always has to be fought for. It doesn't happen naturally. In the run up to the day there were in fact more arguments and problems than you would normally expect - a sign that we were doing something right, pushing out into new ground and taking on arguments rather than shying away from them.
For example, Dipu Ahad (at the centre of organising the demo) had to persuade some of his fellow Labour councillors that George Galloway speaking shouldn't deter them, while also arguing with some in the Muslim community that local Labour politicians have a place on the platform despite the war in Iraq (and much else besides).
There were meetings with various Asian groups in Newcastle to persuade them to support and participate - almost none of which previously backed counter-demonstrations against the EDL, due to fear and insecurity or because they were cowed by the endless media and political rhetoric about Muslim communities. There was a concerted effort in the mosques, but also invitations to other faith groups to be part of it. An unprecedented number of trade unions got on board too, while groups not normally associated with protest (like Newcastle Council for Voluntary Service) pledged support.
The coalition we built in the short period building up to the day was thus truly remarkable - and it was reflected in the diverse array of (22) speakers given space in the rally. Even the Lord Mayor of Newcastle turned up - and was added to the list of speakers. 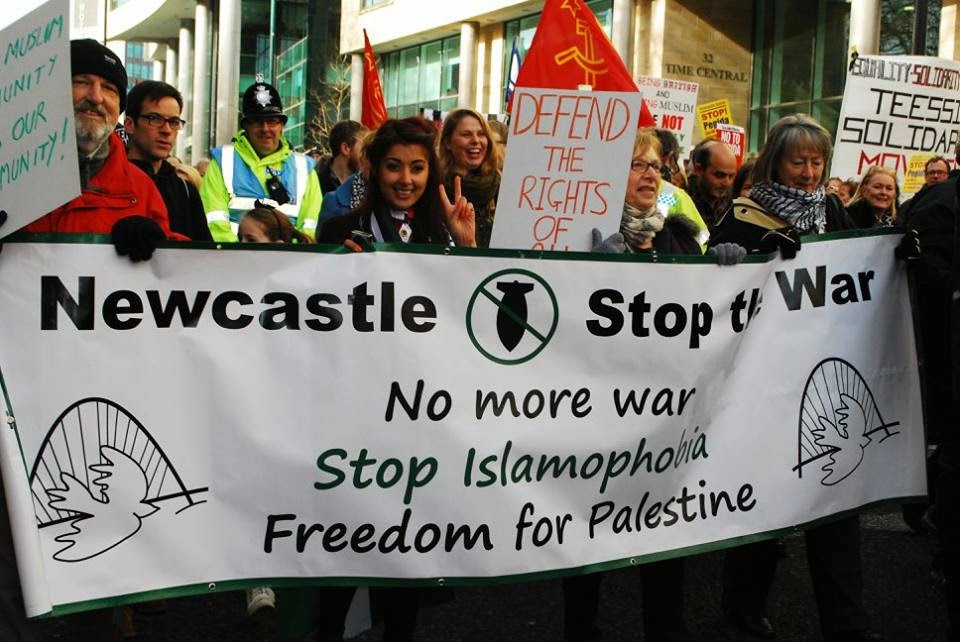 6) No such coalition can, however, be built in just a few weeks. It reflected a long-term process of co-operation among a number of political and campaigning groups, crossing several boundaries.
Above all, it built on the legacy of anti-war and pro-Palestine campaigning. The majority of those involved in organising the demo worked together in organising last summer's series of local protests, marches and vigils for Gaza. There has been joint campaigning over war and Palestine on an on-going basis for some years.
What was true of the organisational core was also true more widely. I recognised a great many faces from last summer's protests against Israel's war on Gaza, or from other protests and public meetings organised by our local Stop the War Coalition or Palestine Solidarity Campaign. Such long-term activity has been especially important for building relationships between Muslims and non-Muslims, especially those of us on the organised left.
This is a precious coalition. We will need it again - whether against war, in opposition to racism, or in solidarity with Palestine.
Also see: my Counterfire article in the build-up to the demonstration