What to do with a tin of beans? Food banks, the left and the movement

I am, as I've noted plenty of times before, a great admirer of Tony Cliff, the late founder and longtime leading figure in the International Socialists (and later SWP). But one of his worst political moments was in 1984, in the early days of the Miners' Strike, when the SWP leadership initially adopted a rather aloof and dogmatic attitude to burgeoning practical solidarity with the miners.

Cliff's argument - at first - was that practical support in the form of food collections and such like was a distraction. What really mattered was putting a political argument about the need for widespread secondary strike action, and using this as the basis for exerting rank and file pressure on trade union leaders.

This political view was correct - and it helped steer the organisation through the year-long strike. But the dismissive attitude towards workplaces, union branches, trades councils, community groups and so on doing food collections for miners and their families was misguided (if, in the circumstances, initially understandable). This was in fact a major form of support and solidarity for the miners from large numbers of working class people. It was practically useful - indeed necessary - but it also expressed political support for the miners and their cause.

It was solidarity, not charity. It was practical and political. It was not an alternative to other forms of action, but an urgently necessary complement to them.

Cliff's initial attitude was summed up by his unfortunate remark that "the only good thing to do with a tin of beans is to throw it at a policeman". One version - possibly apocryphal - is that he changed his attitude after Chanie, his lifelong partner, told him that from now on he could do all his own cooking, and he would soon learn how important a tin of beans can be. Ian Birchall, in his superb biography of Cliff, suggests that the experience in Birmingham - where SWP members were involved in practical support work - was influential in him changing his mind.

Fortunately, Cliff was responsive to what was going on and he (and the wider leadership) corrected the earlier mistake and began taking such efforts seriously. The organisation went on to play an exemplary role in promoting miners' solidarity while maintaining a distinctive political analysis. 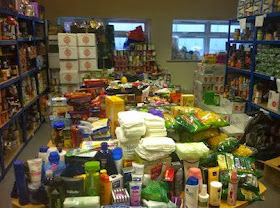 This brings us to food banks. The danger for the left is remaining aloof from what is a practically important form of necessary support for hundreds of thousands of working class people and also a highly political issue. It has become more acutely political in recent days due to Iain Duncan Smith's spat with the Trussell Trust, Christian providers of food banks, and the charity Church Action on Poverty (not to mention the evident contempt many Tory MPs have for food banks and those who benefit from them).

The very existence of food banks in communities throughout the UK is an indictment of this government's austerity drive. The rapid growth of food banks is a graphic, and disturbing, index of the human impact of austerity. It shines a light on the grotesque levels of inequality in our society and the injustice of current government policy.
It is important for socialists to voice the political arguments about food banks - how it is government policy that is making them necessary, how we need a radically different approach to alleviate poverty - just as it was necessary in the Miners' Strike to articulate a set of political arguments.

But that isn't enough. In fact there is something grimly dogmatic and sectarian about those who trot out a 'never mind about making donations to a food bank - we need to stop the cuts' line whenever there is any reference, e.g. on social media, to food banks. I prefer the approach taken by workers at offices in Darlington, in north-east England, who decided to ditch their customary Secret Santa and instead do a food bank collection. See the picture of their collection above. How would you feel if your own workplace was responsible for this?

It strikes me as an excellent act of solidarity and - at a time of very weak workplace organisation - a very politically useful thing to do in your workplace. I wish I had suggested it where I work.

Imagine if hundreds, perhaps thousands, of workplaces throughout the country do the same thing next Christmas. Will that be an irrelevant distraction from the real fight against austerity? Or will it be a collective and visible act of solidarity? Will it be a great way to stimulate discussion at work about the politics of cuts, poverty and so on?

Will it be a way of connecting workplaces with wider society, especially with its poorest and most vulnerable people? Will it be a powerful means of asserting that we won't be divided against each other, but will instead stand up for each other and provide support? It surely raises the political level in workplaces, counteracts divide-and-rule and stigmatisation, and opens up opportunities for new alliances.

I hope the organised left, anti-cuts groups and trade unions take the initiative with this (and there's no need to wait until next Christmas). This doesn't necessarily mean the movement starting food banks itself - although trade unions, with their considerable resources, could at least consider this option - but I do think that initiatives like the one in Darlington could point the way.

We should think of such collective practical solidarity (and, if you think about it, when approached in this way it is clearly solidarity not charity) as a springboard to participation in political campaigning against austerity. It is a starting point in turning the tide against the Tory war on the poor.

This should not be seen as an alternative to - or substitute for - strikes, demonstrations or anything else. It is one thing that we can do. It can be not only of practical service, but a vital way for the left to make its politics relevant and meaningful to wider layers of people.